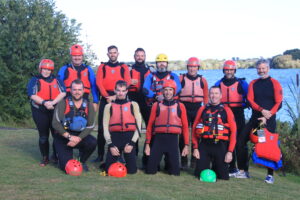 Following the extensive flooding in the county last year, Northants 4×4 Response has expanded its abilities to include flood rescue by training and equipping a number of its volunteers to DEFRA Level 2 standards thanks to support from VMT in Islip.

VMT’s training team put our volunteers through their paces at both the Nene Valley White Water Centre in Northampton and the Middle Nene Sailing Club in Thrapston to ensure they have the skills and knowledge to keep themselves and those they are rescuing safe when in or around flood water.

Northamptonshire may be a double land-locked county, but it has a lot of water in it and with changing weather patterns it does not always stay in the right places. 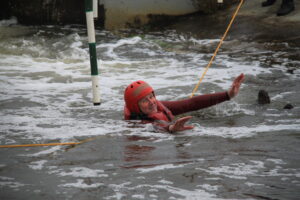 Four-wheel drive vehicles are often synonymous with fording water, but flood water can hide hidden hazards such as lifted inspection covers, washed-out surfaces or general debris that can catch out the unwary, especially where the water is, or has been, flowing.

The team’s additional skills will allow its volunteers to work alongside colleagues from other organisations to make greater use of its logistic capabilities to transport equipment right to where it is needed, in safety, as well as being able to take an active role in rescuing those stranded by the water, whether in their homes or vehicles, and take them to a place of safety.

It costs around £700 to equip a volunteer as a flood first responder, and as a charity Northants 4×4 Response relies on donations to fund its activities. It has launched a JustGiving campaign to help it acquire the additional specialist equipment it needs and fund further training for more of its volunteers in the future.

The next person we help could be you.